This is a review of ‘Violent Night’ from an advance screening at New York Comic Con. The film will arrive in theaters on December 2, 2022.

Santa Claus is coming to town—and he’s here to kick ass. The concept of a disillusioned Santa Claus saving a helpless family from home invaders sounds like an idea that belongs firmly on the “nice” list. Yet in Violent Night, the movie struggles to make the most out of a promising premise. The film begins with an alcoholic Santa, played by a committed David Harbour, lamenting the over-commercialization of Christmas. Nobody ever wants a heartfelt gift anymore, which brings us to Trudy, a young girl who wants her divorced parents to get back together. Temporarily they do, as the three of them head over to spend Christmas with the father’s extended family. So far, so good, if a little too candy-cane sweet, but once the violence begins the movie jerks wildly between sweetness and darkness in a way that would make our drunken Santa puke. And as we see early on, the man can puke.

But surely we can root for this sweet, kind family, right? Not exactly. As Trudy and her parents arrived to meet the rest of the family, I thought they were visiting a country club. In actuality, it’s the family home, the size of the Overlook Hotel. The large staff, including security, concierges, catering, etc., doesn’t evoke a home, until you realize this family is just obscenely wealthy. They’re also obscenely obnoxious.

Beverly D’Angelo plays Gertrude, the matriarch of the family. Her son is Skylar, Trudy’s dad, and her daughter is Ava, an inheritance-obsessed woman married to a man who claims he could’ve prevented 9/11, and with a son who has to have grandma pay off his school to cover up his sexual harassment cases. Oh, and apparently they got their fortune by siphoning military money from the government. It’s a family so noxious that one expects them to turn on Trudy’s relatively kind side of the family until Santa shows up to kick their ass. But bizarrely, they are not the villains of this movie. 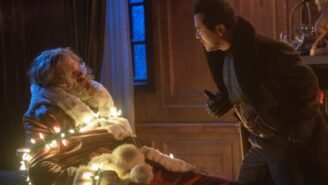 Instead, the villains consist of a bunch of crooks posing as staff who come to rob this family of their fortune, led by John Leguizamo as “Mr. Scrooge.” In order to show that these are definitely not the people we should want to win, the film has these thieves gun down the real staff members in cold blood. Otherwise we might like them more than our “heroes.” The problem is that other than Santa, the film doesn’t give audiences anyone to root for in this fight. Sure, Trudy’s just a kid, but Santa could feasibly save her and just leave everyone else to rot.

A good violent action movie hinges on the audience cheering the heroes and hating the villains. It’s another reason why Violent Night lives in the shadow of Die Hard, where the villains are dastardly terrorists and the hero is one man battling against the odds. Here, Santa feels overpowered, given a backstory as to why he fights so well. I would’ve preferred a Santa in over his head, or one with a backstory so weird you have to enjoy it.

This characterization is just one of many examples in which Violent Night attempts to have its Christmas cookies and eat them too. Most of them stem from the indecision as to whether the movie plays its concept straight or for laughs. There are a couple of really funny one liners, but Violent Night uses comical Christmas references with an odd restraint. Director Tommy Wirkola previously directed the absolutely bonkers Dead Snow 2, which has several “I can’t believe they went there” moments. Violent Night brushes against that line often, just to pull back every time once it remembers it’s a Christmas movie. 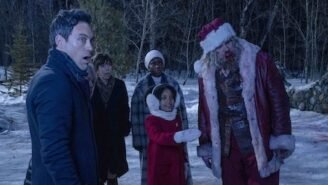 Even the fight scenes feel a bit reined in (pun intended). The action gets going when a new team of combatants arrives, but unfortunately the film then winds down. There are a handful of creative kills, including one with a Christmas tree star early on, but the film rarely builds momentum off these. David Leitch produces the film, and so I hoped for something like his recent Bullet Train with just nonstop action and chaos. Instead, Violent Night has surprisingly long stretches with nothing, well, violent.

Acting-wise, David Harbour does a great job as always, providing the rare campier elements that the film’s premise craves. But again, his alcoholic former Norse-warrior version of Santa flip-flops between absurd comic relief character and hardcore action role, never quite committing to either. The ever-underrated Alex Hassel helps make Skylar a somewhat sympathetic character, even if he isn’t one we can excitedly root for here. John Leguizamo seems to have the most fun, but it doesn’t help that he somehow makes Mr. Scrooge semi-likable through his charisma.

Violent Night can’t decide if it’s an action or a comedy, irreverent or sincere, emotional or detached. It’s a Christmas movie with an identity crisis. Several times I found myself wishing I was watching Die Hard or Home Alone, two movies that Violent Night not only apes but even name checks. It doesn’t help to remind viewers that they’ve seen the elements of this film done better elsewhere. But if nothing else, Violent Night at least cements Die Hard as the ultimate Christmas action movie.

Due to an indecision of what kind of movie it wants to be, Violent Night is neither naughty nor nice. Instead, the Christmas flick serves up a lukewarm glass of milk and half-stale cookies with a tepid plot that goes down a bit easier with a side of action and comedy.