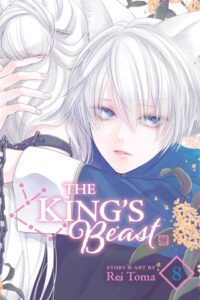 The secret is out and not in the way I thought it would happen. Rangetsu flat out tells Tenyou that he’s a girl and while Tenyou is shocked, just as I predicted, he was very accepting of it and it only enhanced his feelings for her.

With the secret out of the way, the search for Sogetsu begins! We learn that Princess Ririn had a hand in it and is willing to help Rangetsu get into the inner palace so that he could search for her brother. While things get arranged, Tenyou manages to get a meeting with the king. When he gets there, he noticed that the king’s beast servant is nowhere to be seen.

Disguised as Princess Ririn’s maid, Rangetsu enters the inner palace. With so much incense everywhere, it dampens her sense of smell but through it all, there is a faint scent of blood. She picks up on it and follows the trail to one of the inner palaces where she finds Sogetsu! Sogetsu tells Rangetsu about the king’s true desires and, of course, as one would expect, they are caught. Rangetsu is defiant but the king ends up playing a trump card! What will she do?

Lots of development this time around. The majority of it comes to Rangetsu revealing the truth to Tenyou. I thought Tenyou would have discovered the truth by accident; however, this works, too. Now that he knows, it’s as if a light switch was flipped inside of him. It no longer felt awkward to refer to Rangetsu as cute. In fact, it deepened his love for her even more. There was even a moment where he couldn’t control himself and began to kiss Rangetsu but she ran away… not because she didn’t want it… but because she was super inexperienced and was embarrassed about not knowing how to kiss! It really was a cute moment but it’s nice to see that their relationship is solidified now!

The reunion with Sogetsu wasn’t what I thought it would have been but given the circumstances, it played out perfectly. Through Sogetsu, we get confirmation of what the others suspected about the king and why he seeks immortality. To know what Sogetsu has gone through was a bit painful to read but it does serve to make you hate the king even more

Outside of that, Ririn scored some redemption points for confessing everything about Sogetsu’s disappearance and helping Rangetsu locate him. We also were given a little backstory about her and why she was involved with Sogetsu’s “murder.” I won’t go into too many details but there was a certain contrived emotion involved.

Another great volume of The King’s Beast! Now that everything is out on the table, the only things left to do is rescue Sogetsu, get rid of the King, and make Tenyou the new King. Why Tenyou? Look at the title of the manga… Rangetsu is clearly on every cover of a manga called “The King’s Beast.” Since she is Tenyou’s beast servant, it pretty much tells you the ending to the series front and center!

Not sure how many volumes are left in this series as it looks to still be publishing in Japan and neither MyAnimeList nor AniList have a total for the number of tankobans yet; however, I can’t imagine this going on for much longer with the way things are progressing. Either that or a new arc will begin after this that we’re just not seeing but so far, it seems as if all of the goals are in reach that the series have established.

With the cliffhanger at the end of this volume, it’ll be interesting to see how everything gets resolved. Also, I loved the little detail with Rangetsu at the end being able to hide her powers like that. The fact that she can control them is pretty special. I mention that because that could end up playing into the solution on how to escape and free Sogetsu but I believe only time will tell!

This is one series that I look forward to every release!

This item was provided for review by Viz Media