I want to start from the beginning here. I’ll never forget back in 2017 when Mario + Rabbids Kingdom Battle was leaked. None of us on the Nintendo Entertainment Podcast thought it was real. It couldn’t be! Mario with a gun and teaming with the Rabbids? No way! But as my review showed, it was an excellent title. So when the sequel was announced, we couldn’t wait to experience it. This Mario + Rabbids Sparks of Hope Review will hopefully show you that it was worth the wait.

The game continues basically right where the original title left off. Mario and the Rabbids still have their worlds fused, but when the Sparks come to the Mushroom Kingdom with Cursa not far behind, things change pretty quickly. You’re rushed into outer space, where you need to go to various places to clear up the “Darkmess” puddles that Cursa and its crew left behind to get crystals to reach the villain’s stronghold eventually.

Plot-wise, the game is pretty basic. But that doesn’t hurt it per se. Because instead of focusing on the grand scale, the game takes its time to flesh out the worlds you visit and how “Rabbid Culture” has developed them. 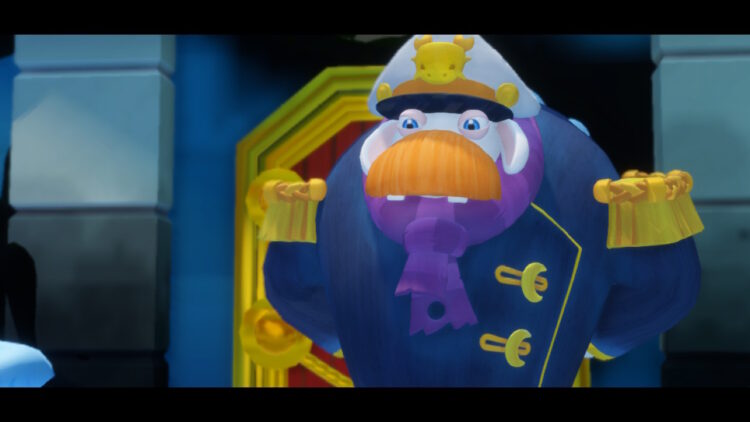 Moreso than the first game, we get to see why the fusion of the worlds wasn’t the worst thing ever. The planets the Rabbids took over at times were pretty great, and they were full of characters that added personality to them. We get to meet the wardens like Bea, Momma, and more through a series of paintings, we learn their backstories. Each world is unique from top to bottom, and you’ll want to explore them just to see what they offer, and what insights you’ll get from Beep-O. Yes, your AI friend is back, but this time, he has a companion in Jeannie. The voiced banter between these two is priceless, and you’ll enjoy it a lot.

Another thing you’ll enjoy is completing all the changes in these worlds. Some of them are basic, like “get rid of three of this enemy,” and others are more puzzle oriented. You don’t need to complete these challenges, but you’ll be glad you do over time as you’ll get coins, star bits, and, of course, EXP.

The team at Ubisoft promised that the Rabbids would be much more intelligent this go around, and they weren’t lying. Not only are all the main Rabbids voiced, but they exude personality. I was instantly enamored with the acting of Rabbid Peach, Rabbid Mario, and Rabbid Rosalina because of how they were portrayed. And then, of course, there’s Edge. 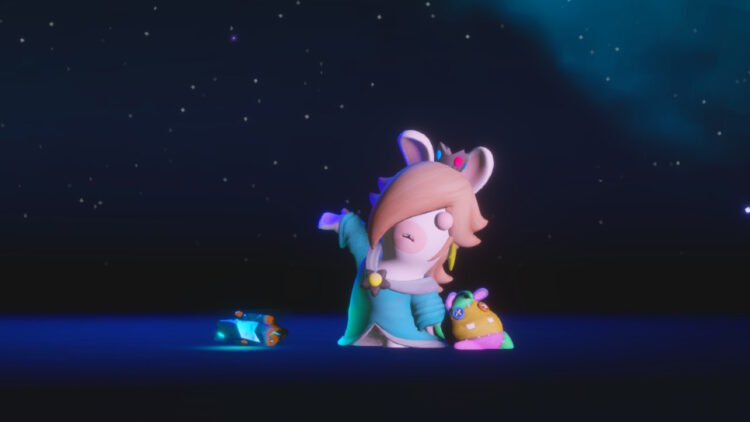 Rabbid Edge was one of the original Rabbids in the game, and she’s a total boss. Also, Rabbid Mario has no chance with her. You’ll agree after you see them together. The way the characters interacted with one another was fun, and when you see them in cutscenes coming together, there are plenty of epic moments to enjoy. I grabbed a LOT of screenshots of certain key moments, and the only reason I won’t post all of them here is that some of them are really spoiler-ish, and I want you to have some fun figuring it out for yourself, after all. Everyone gets a moment to shine. Heck, even Bowser gets to have some really funny moments! You’ll love your party, which is great because the gameplay is also where the title shines.

I could spend a great part of this Mario + Rabbids Sparks of Hope Review talking about the combat system and how it improved from Kingdom Battle, but I’ll just stick to the broad strokes here. The combat has been completely revamped to offer greater freedom of movement, as well as the ability to enact all manner of strategies.

As I noted in my review of the previous game, each character has unique abilities and weapons for you to use. Here in Sparks of Hope, that’s taken to the next level. Everyone’s weapons are tailor-made for them, and many shy away from the basic gun motif. Rabbid Luigi has a frisbee that bounces off of enemies; Edge has a massive buster sword, Bowser has a rocket launcher, Peach’s umbrella is a shotgun, etc. Each weapon has its own range, method of attack, and so on. You’ll want to try them all out so you can learn them all and make your best team. This is something you’ll NEED to think about, as the enemies and levels are no easy thing. 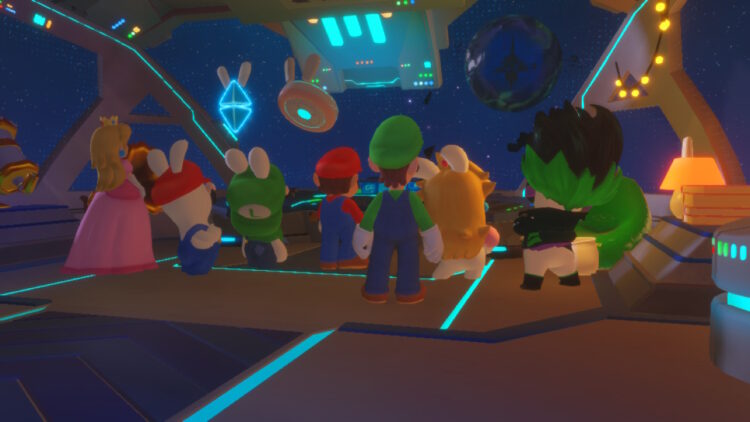 In the game, you’ll have complete freedom on which battles you choose to do outside of key mission bosses and such. When you dive into each level, they’ll have a variety of things to do or achieve, as well as terrain to move around and enemies to defeat. Some fights will be about wiping out all threats. Others will only focus on certain enemies. Then, some levels will want you to reach a certain area to clear it. Adapting to each level is both crucial and satisfying. My main team was Mario, Rabbid Peach, and Edge. But sometimes, I looked at the enemy’s makeup and knew I need a sniper, so I’d swap in Luigi. At times, I almost lost a level because I brought the wrong squad. That shows you how tough the game can be.

Furthermore, some specific levels in the game will force you to play as only two specific members of your squad, ensuring you give all of them a try at least once.

The enemy variety is good, and you’ll need to examine enemies before every fight to ensure your characters are loaded up with the right skills and Sparks to overcome. The skill trees are back in Sparks of Hope, and you’ll have fun picking and choosing what skills to grow and which ones to leave alone based on your playstyle.

I really want to pause here and give props to the level design team. Each battle is unique, even if you’re just facing a random minion. You’ll spend many game moments looking around for the best way to enact combos with your characters. It’s a lot of fun. Even if you’re struggling with a level, the moment you complete it, you’ll smile in satisfaction. Between team jumps, dashes, basic attacks, special attacks, and the Sparks you can use, every single battle will play out differently, even if you replay a level.

The game strikes a good balance of allowing you to find a groove and changing things up on you so you don’t just blaze through the game. There are even some levels that’ll appear vast to cross…but if you pay attention…you can beat it in moments. That’s very fun and funny!

Ok, onto the Sparks. They were easily one of the biggest parts of the game. Heck, they’re in the name of the game! But how much would they improve things? A lot, a whole heck of a lot. From the moment you start collecting them, they are a godsend in battles. They can heal you, they can boost your attacks or dashes, they can unleash element-specific attacks on foes and the nearby terrain, and they can shield you from damage, etc. Part of the fun of customizing your squad is realizing which Sparks you need for each battle and then using them perfectly to get you out of jams. Again, the levels can be tough, and the AI is sometimes very punishing. So having the right Sparks to match your squads’ capabilities is a must.

Plus, because of the various challenges in the game, including some secret areas, you’ll have a wide array of Sparks to collect, use, and then upgrade with star bits. By the end of the game, which has an epic boss fight that I won’t spoil, you’ll need every worthy Spark you have to defeat the end boss. 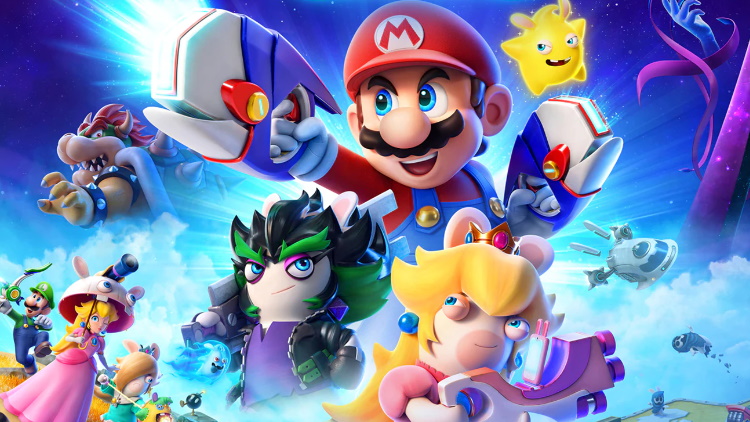 One last thing before I talk criticisms. The game looks and sounds beautiful. The Ubisoft squad put a LOT of effort into making this game polished. Even in handheld mode (that’s where the somewhat blurry screenshots came from, sorry!), the game’s cutscenes stood out. The worlds were crisp and diverse, and the soundtrack for the game throughout was a joy to listen to. The inspiration from Super Mario Galaxy is everywhere, and I love that they went this route with the title.

That being said, this Mario + Rabbids Sparks of Hope Review wouldn’t be complete without some flaws being pointed out, and there are a few. First off, I wish there was more of the overall storyline versus just focusing on the storylines of each world. For example, with Edge, we got her backstory, but it was very loose. They played her as the “mysterious Rabbid,” and at the end, she reveals why she really joined your team, but I wish we got more than that. They put a lot of effort into making Edge stand out from the other Rabbids, and I wish we got to see more of her origin. The same goes for Cursa. We only see it in a few parts of the game and then get an exposition-filled still-shot cutscene to explain how they came to be. Not the best.

Second, while the game is beautiful, there were times when the graphics glitched out on me, including in cutscenes where there shouldn’t have been such errors.

In terms of combat, some of the critiques I had from Kingdom Battle carried over. At times, it’s a bit overwhelming remembering all you can do and should do, and you’re likely to make mistakes as you try to enact your strategies. Likewise, the enemy AI can be brutal, and even on the basic difficulty, you’ll get frustrated when they seem to always be in range of you and do serious damage when you can only slightly harm them. One enemy, in particular, seemed way overpowered and I dreaded facing them every time.

Also, in terms of controls, while the game is solid, many actions are tied to the “A” button. As a result, sometimes I would be trying to do a dash, but because I was close to a teammate, I did a team jump instead, and that almost screwed up my plans. 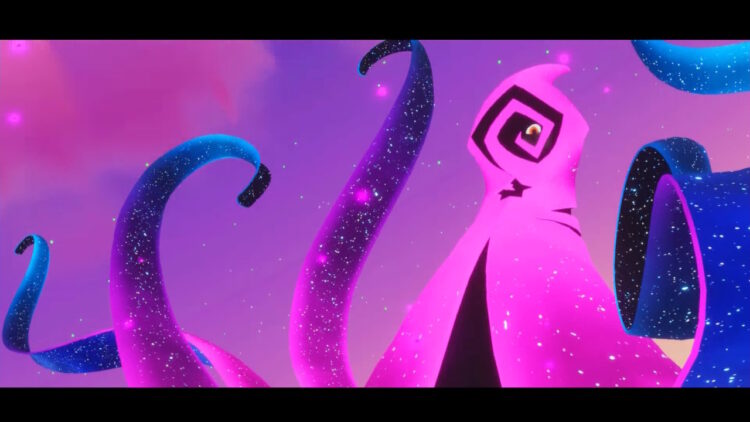 Finally, while the game is expansive with its worlds and the challenges you can do in them, it’s sometimes a chore to find them all. The minimap isn’t the best, and on one of the final worlds, I struggled to reach some of the challenges because I had no idea how to get there. Some people won’t mind that, but I honestly did.

But even with those flaws, Mario + Rabbids Sparks of Hope is a wonderfully fun game that is full of passion, love, and excellent gameplay. It took me 25 hours to beat with me doing a semi-completionist run, and it was a joy. Not everything is perfect, but it’s still a fun time, which is what you want from a game like this.

Review Disclosure Statement: For more information on how we review video games and other media/technology, please review our Review Guideline/Scoring Policy for more info.

Mario + Rabbids Sparks of Hope is a wonderful sequel that lives up to the original’s quality and puts a lot of new elements into it. You’ll have a blast going through the new worlds and finding your perfect team to fight Cursa with!