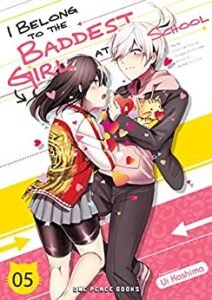 Volume 5 of I Belong to the Baddest Girl at School can be summed up in one word: frustrating.

We finally got the confession we’d all been waiting for in the previous volume, and yet, the series won’t pull the trigger. With a few small events aside, this entire volume can be summed up as Unoki confessing, Toramaru confessing, and then Unoki not committing, saying that he needs more time… despite already confessing.

You already told her you liked her! She flat out told you she liked you and wants to date but you can’t return her feelings when you already did? How does that make any sense whatsoever? So now, we spend the entire volume with Unoki wrestling with his feelings… feelings that he, himself, already knows are true because he already admitted to himself that he likes Toramaru. He simply wants to have the perfect answer/confession… WHEN HE ALREADY CONFESSED.

I absolutely HATE it when series do this. They artificially extend the moment we want to see over the dumbest reasons. Both of them already confessed. They already know that they like each other. They should have been shipped but now, we are being given a one-sided love situation that isn’t really one-sided because Unoki can’t answer Toramaru’s feelings when he already did in the last volume.

Oh, and now we get the typical school festival trope where they have a Shout Your Heart Out event. Gee, I wonder what’s going to happen there?

On the frustrating front, they reduced Yodo to a background character just as I predicted that they would. Now, all she does is play that little voice to inch the two of them together which seems completely unnecessary because both Unoki and Toramaru are trying to figure it out without her butting in. I questioned what the point was of introducing her as a character in Volume 4 and now, I’m still wondering why she’s even in the story. She is literally serving no purpose other than being filler. If you subtracted her from the story right now, literally nothing would change outside of a few panels being reworked to refocus the spotlight on Toramaru and Unoki. Heck, you could have Matsuri or Yutaka fill in the same role as Yodo and keep everything the same. Now, she forced herself into being friends with Toramaru by using the information on Unoki as blackmail but we still haven’t even seen any of the payoffs from that.

Toramaru’s development here is her simply coming to reality with her feelings for Unoki. She even worked up the courage to flat-out tell him that she likes him and that they want to date. Other than that, there really isn’t much that’s different with her outside of her trying her best to do things to impress Unoki… such as cooking him a better bento than last time.

Unoki, I just want to smack him across the face and not stop until I can’t feel my arm anymore. For four entire volumes, you came to realize that you like Toramaru. He literally confessed his feelings in the last volume and, yet, he can’t do it again? I’m sorry but when you like a girl… and that girl TELLS YOU TO YOUR FACE THAT SHE LIKES YOU… that is the ultimate free pass to return her feelings. The guesswork of whether or not she likes you back is gone. It’s 100% foolproof and yet… here we are. I could accept this situation had he not already confessed in the last volume but since he did, all of this seems wasted and pointless.

The only good thing to come out of this volume is Yutaka ALMOST confessing her feelings for Matsuri. See, unlike Unoki, there’s a valid reason for hesitation. She’s not sure how Matsuri is going to react. She’s scared of rejection because of the type of relationship that she’s aiming for. This is a proper way to build up a relationship and it’s a bit embarrassing to say that I’m way more invested in seeing these two get together versus the two main characters this whole series is built around because at least with Yu-Matsuri, it’s being built correctly, it’s cute, and it makes you cheer for Yutaka.

I’m trying really hard to like this series. It started off with a huge bang and hit the ground running. Then, Yodo was introduced and it’s like it ran straight into a brick wall. Now, we have a pointless new character that’s already delegated to filler content, and a developing relationship that looked like it was a done deal, now spinning its wheels for no reason whatsoever.

I still blame Yodo for everything. Imagine if she wasn’t in the picture at all. Unoki and Toramaru would still be unsure if either one liked each other. Then we go into the overused school festival trope and we proceed normally with the setup for the Shout Out Your Heart event. Instead of Yodo being an unwanted third wheel, you just replace her with Yutaka and Matsuri getting into Toramaru and Unoki’s ears, pushing and encouraging them forward to just confess.

And get this… not only would it give Yutaka and Matsuri more “screen time” but it could have also caused a trigger inside of Yutaka for her to gain enough courage to go through with her own confession. Almost as if she were taking her own advice! Then, we can ship all of them in the second-to-last volume and use Volume 7 as the epilogue/fallout of everything.

It would have been amazing because all of the build-ups would have given way to the payoff. Instead, we’re given this… and I’m sitting here just wondering why. The addition of one character, in my opinion, completely destroyed what this series could have been.

There are still two volumes where it could try and redeem itself but even if they make Unoki x Toramaru official, to me it’s too little, too late. The big moment is already gone and ruined. At this point, since I’m 5/7 in… I’m invested until the end but Yodo really did tank a series with tremendous potential.

This item was purchased for review