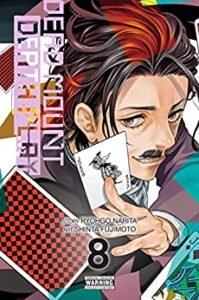 Volume eight of Dead Mount Death Play pulls back the curtain on a lot of things but it’s mostly character development. Soara, Lulu, and Civil pay a visit to Corpse God and seek a divination from him. It is there where he learns that there’s something off about Civil. He instantly recognizes that he’s from the other world but doesn’t know his true goals or purpose. As they are wrapping up, Taipei shows up and gets into a battle with Soara.

Things begin to get interesting on Solitaire’s side as well. He hijacks a famous singer’s music video and uses it to broadcast a message to the bastard children of Sabaramond. Meanwhile, Takeru is making moves to gather as much intel as possible and has even assigned Bao to look over things. All the while, Civil ended up stealing the real Polka (the stuffed shark) and decides to use it as bait to lure Corpse God out.

Right before Corpse God does so, he has another bonding moment with Xiaoyu. While that’s happening, Bao ends up encountering Majiri Akakura, the two of them begin fighting over Xiaoyu and it is here where we learn Bao’s true identity!

The ending does a bit of a small time skip which was abrupt but it does lead us to the fateful showdown between Corpse God and Civil as he’s come to take back the real Polka!

Okay, so there is a LOT to take in with this volume as far as character development goes. A lot of it will end up spoiling some of the big reveals so I’ll just touch upon a couple of them.

First off, we learn what Civil’s last name is and that he’s from the other world. Corpse God sensed that when he showed up and seemed awfully familiar, yet, different. At first, I thought we had a super major reveal on our hands but now it has been shrouded in a bit of mystery. This also points towards the origins of Lulu and Soara as well, although, one of which is simply possessed. Thanks to their fateful meeting at the end of the chapter, we FINALLY get Corpse God’s real name revealed! Next volume, I can finally refer to him as something other than Corpse God or Fake Polka! Although, after seeing his name, I’m not sure I want to attempt typing that in my reviews…

I love how Solitaire keeps doing things and others who witness his antics wonder what his plan is, only for the manga to break the fourth wall and say that he has no plan. It’s true that Solitaire does nothing but act on impulse. He’s so erratic and unpredictable but it’s interesting how he’s still trying to get to the bottom of the Bastard Children of Sabaramond. Through this encounter, though, we learn that Fire-Breathing Bug isn’t just one person but a multitude of people that have existed over the past 100 years! We also learn that the true purpose of them is to burn the Bastard Children of Sabaramond! While that does make some sense of their actions over the series, we’re still missing the “why” component here.

We learn a little bit more about Xiaoyu’s past and how his family sold him to Rozen. Corpse God has a nice little chat and relates to him by saying his own father sold him before stabbing him in the back… literally. I really like these bonding moments between the two of them. It’s like they’re slowly becoming brothers! Of course, this backstory comes at the same time that we learn of Bao’s true identity as well as what her connection is to Xiaoyu.

It’s another packed volume with so many different factions making their moves, each with their own agendas. Learning that Civil, Lulu, and Soara are associated with some “elders” who have fled the country in fear of an impending event was also interesting. That just adds, yet, another faction for us to deal with. This means we have the Elders, Civil’s group, The Shinayama Clan, the Police Force, our group of villains, the Mediators, the Otherworlders, the Agakura Clan, the Lei clan, those who work under Takeru, and I’m probably forgetting some.

That’s a LOT of factions… even more so than in Durarara!! All of which have either shared interests or are working with or against one another for their own goals. There’s definitely a lot to take in but we know that Volume 9 is going to start off with Corpse God vs Civil over the real Polka. I don’t think this will be a fight so much as an information exchange. After all, Civil didn’t seem like he wanted to do battle. He merely wanted to draw Corpse God out to confirm something. Oh yeah! That means we’ll probably get more information about the other world and all of its factions, too!

I shouldn’t complain, though. I kind of borrowed this faction system for my own light novel series, haha. Although, I’m not taking it to the extreme that Narita is doing here. Either way, this series is still very compelling and I’m looking forward to what comes of Civil and Corpse God’s meeting!

And just because… allow me to type this one final time as I’ll be using his real name from now on: Corpse God

There. Calling him that is officially over.

This item was purchased for review.